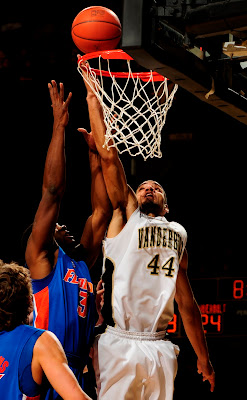 It was announced on Monday by the SEC office that sophomore Jeffery Taylor claimed his first career SEC Player of the Week award for his performance last week in two Commodore wins over Tennessee and LSU. Taylor averaged 20.5 points, 6.0 rebounds and 2.5 assists in the two wins, and scored a career-high 26 points in Vanderbilt’s win over Tennessee. It was the highest single-game point total by a Commodore this season.
He was also 12-of-12 from the free throw stripe to become just the fourth player in school history to be perfect from the free throw line when attempting 10 or more shots. He also scored 15 points to go with five rebounds in a win over LSU.
The 6'7 forward from Norrkoping, Sweden, has started in every game of his Vanderbilt career and is averaging 13.9 points and 5.3 rebounds per game in 2009-10.
Although this is Taylor's first Player of the Week honor, he did win a Freshman of the Week accolade last year. It is the Commodores' second POW honor this year - junior A.J. Ogilvy claimed the honor in week four of the regular season.
Posted by A.Boggs at 10:58 AM