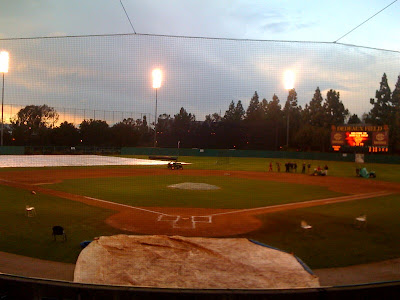 Well despite flash flood warnings in LA County and ominious clouds above, it looks like we will get this game started on time at USC.

USC's grounds crew went to extreme measures to get the field ready and it seemed to work. Both squads took BP in the cages. The same can't be said on the other side of the bracket where the UCLA-Oklahoma State game was cancelled due to rain.

The Trojans (3-2) lost to OSU, 6-4, in extra innings last night. The Cowboys held a 4-0 lead into the eighth before USC rallied to send the game into extra innings.

Hill is making his second start of the year. He held Niagara scoreless in 6.2 innings of work last Saturday.
Posted by SID at 7:51 PM