A Day in Hollywood 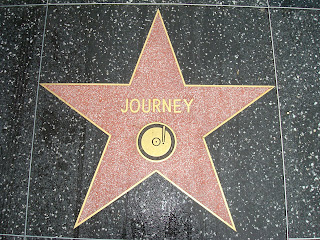 I know, I hear the groans and can almost see some of you rolling your eyes, "It must be nice to get an all expense paid trip to Los Angeles." I won't lie to you, it has been nice and is one of the perks of working in athletics. So I won't disappoint you when I work in my experience in Hollywood. Thomas Samuel, former VU media relation intern Will Matthews and I decided to try our luck at star-gazing on Hollywood Blvd. We found some cheap parking (seriously, $5.00 for about an hour and half was awesome) and started wading through a serious tide of global tourists. Former Lipscomb University A.D. Steve Potts warned us the day before that "Every day is Halloween down on Hollywood Blvd," when we met him on a brief stop at Pepperdine the day before.

We stopped to walk through the Kodak Theater, while moving towards Grauman's Chinese Theater, and encountered (because we really had no desire to meet them) no less than one Superman, two Darth Vaders (with a variety of colored light sabers), Yoda, Michael Myers, a Tickle-Me Elmo that charged extra for laughing, and a bright blue body-painted girl that was either passing herself off as someone from Avatar or a Smurf. I honestly didn't think to ask. The saddest snapshot that I couldn't bring myself to take was of a guy dressed up like Charlie Chaplain waiting for the bus.

It was interesting to watch people of all ages and cultures walking along with their heads down on both sides of the street reading the stars on the Hollywood Walk of Fame. I was able to locate a couple of heroes of my youth (Journey and Motley Crue) and found myself constantly asking Thomas and Will, "How did that guy get a star?"

We cut the visit short or rather I volunteered as the only one of us with a real raincoat, to go get the car as it started to pour. My choice to wear shorts would turn out to be a poor one as I wouldn't dry out until sometime after Jason Esposito's homerun last night. We went in search of the mythical (at least to me) Whiskey-A-Go-Go where Jim Morrison and the Doors were discovered and signed by Elektra records in the late 1960's. It turned out to be off Sunset Boulevard and like many things I had built up in my mind, not at all what I expected. Not even one heavy metal hairdo waiting in line outside, just a sign that said, "Check us out online." What would Jim Morrison say about his old haunt.

We finished the day on a great note, sharing a quick dinner at La Barca mexican restaurant in homage to the Barca Blog's namesake before heading to USC's Rod Deadeaux Field. The afternoon deluge caused a 30 minute delay in the game, but thanks to the LA Fire Department, the field was dried in a trial by fire...literally. No pictures were allowed to be taken or mention made on the broadcast, but LAFD took a page from my old little league coach by soaking the dirt with gas then lighting it on fire. Bottom line, it worked and allowed the Commodores to smoke the Trojans 10-1.

And to think, we were told we would be rained out. Don't stop believin'.
Posted by Eric Jones at 3:41 PM