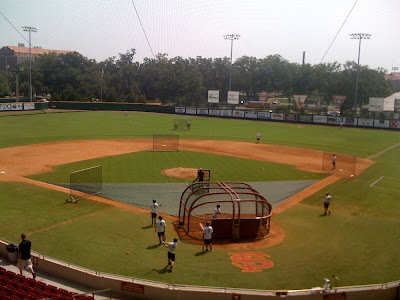 Weather Report: It's another blistering hot day at Dick Howser Stadium. It's already 95 degrees at the ballpark with the field temp over 100 degrees for the third straight day. Winds are blowing from the North at 7-9 mph.

Here is Vanderbilt's lineup for the championship game of the NCAA Super Regional vs. Florida State. The winner of today's game advances to the College World Series in Omaha, starting on June 19th.

VU goes with the same guys in the lineup as yesterday while moving Loftus and Yaz up in the batting order.

The Commodores will send righthander Jack Armstrong to the bump today to face the Seminoles. Armstrong (7-3, 4.32 ERA) has 49 strikeouts and 38 walks in 77.0 innings this year while opponents are hitting .285 off him. As Eric "the Stooche" Jones reported yesterday, Jack has had some tough luck thus far in the post-season, but you might choose to look at the last time he pitched in his native Sunshine State. It was back on April 4, when Armstrong threw six shutout innings to get his fourth win of the year against Florida in Gainesville.

After starting a pair of left-handers in the first two games of the Super Regional, FSU will counter with right-hander Geoff Parker (4-1, 4.94 ERA) on Sunday. Parker threw in Friday night's Super Regional game against the Commodores, allowing 4 runs on 5 hits with 3 strikeouts in 2.1 innings of relief. Parker is making his 30th appearance of the year on Sunday. He has 67 strikeouts and 38 walks in 74.2 innings this season.
Posted by Travis Young at 10:27 AM