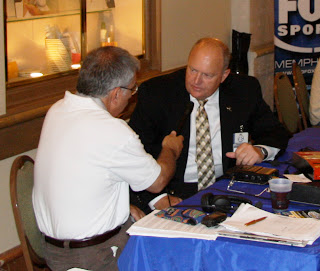 Wednesday night, Vanderbilt Interim Head Coach Robbie Caldwell was so unrecognizable among the public in Birmingham that he even received a tip from a restaurant patron when he held the door for them. After Caldwell's performance at Media Day on Thursday, his days of being mistaken for a doorman are likely over - at least by anyone who follows SEC football.

Making his debut in front of the national media, Caldwell left every room and hallway at the Wynfrey Hotel in Hoover, Ala., buzzing about the newly-minted coach of the Commodores. Showcasing his sense of humor and humility, Caldwell stole the show on Thursday — even receiving an ovation following his appearance in front of the print media.

Caldwell's memorable showing at SEC Media Day has led to an influx of media coverage from media outlets throughout the country. Here are a few of the many articles about Caldwell and the Commodores at SEC Media Day on Thursday.