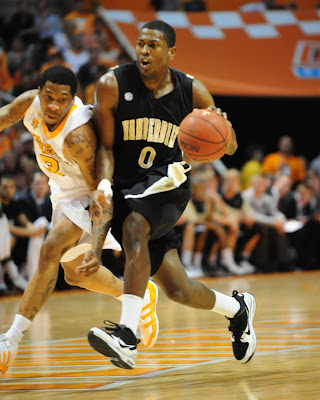 Jermaine Beal once again logged big-time minutes for the Miami Heat Wednesday night in NBA Summer League play in Las Vegas, but unlike the game on Tuesday, his team came away with a win - a 92-83 victory over the Detroit Pistons.

Beal played 21 minutes, scored 11 points, dished out three assists, and had two rebounds in the Heat win. Beal was 2-for-6 from the floor, but converted all seven of his free throws. On Tuesday, the former Commodore point guard scored four points in 26 minutes of action in a loss to Golden State.

Derrick Byars logged nine minutes for the Bulls in a 79-50 win over the Clippers, but did not score. A.J. Ogilvy did not play in the game.

Newly minted Vanderbilt Hall of Fame member Shan Foster returns to the floor tonight against the Washington Wizards in Summer League action. The game tips at 8 p.m. Pacific time.
Posted by A.Boggs at 7:37 AM