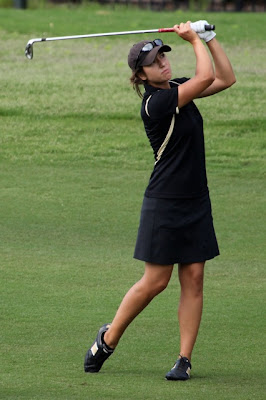 Rising junior and first team All-American Marina Alex qualified for the U.S. Amateur on Monday after registering co-medalist honors at U.S. Amateur qualifying at the Haworth Country Club in Haworth, N.J. Alex, from Wayne, N.J., shot an even-under par 71, and tied Kelly Shon of Port Washington, N.Y., for first place in the qualifier.

Alex's hometown newspaper, northjersey.com, chronicled her trip around the Haworth course in this article. The U.S. Amateur is slated for August 9-15 at Charlotte Country Club in North Carolina.

Anna Leigh Keith attempted to qualify for the U.S. Amateur on Tuesday at the Wanderer's Club in Wellington, Fla, but missed the cut by one stroke. Keith shot a 73.
Posted by A.Boggs at 11:48 AM