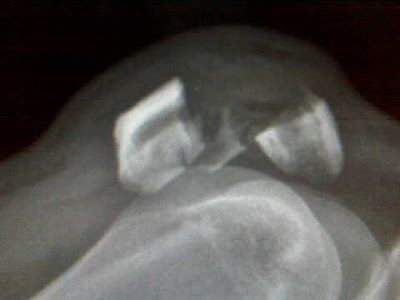 An update on Corey Williams. Above is the x-ray of his knee, and as you can see his kneecap is broken. After seeing that, it makes the play he made (video) that much more amazing. He will have surgery back at Vanderbilt early this week and is out for the year.

An unfortunate end to what was shaping up to be a great first year for the redshirt freshman from Huntsville, Ala. He had developed into one of the top hurlers out of the bullpen, making 12 relief appearances and was 1-0 with a 2.65 ERA. The southpaw had 17 strikeouts to just six walks in 17.0 innings and opponents were hitting just .215 against him.