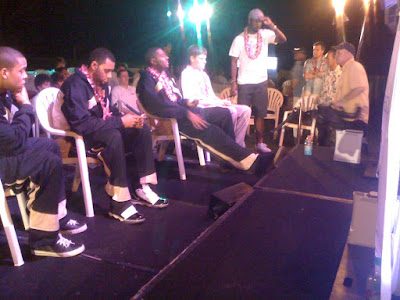 By A. Boggs - After a five hour plane flight, we landed in Maui at 4:45 p.m. Hawaiian time and headed for the Hyatt in Lahaina, about an hour's drive from the airport. But, we couldn't leave the airport without getting a lei from the Maui Invitational organizers...we all loved them, and most of us wore them the rest of the night.
On to the fun...as soon as we got to the hotel, which is spectacular by the way, the players and staff were invited to the XBox 360 party, hosted by EA Sports, the title sponsor of the event. They had the latest NCAA Basketball game on four screens, and two players from each team competed against each other for the title of best video gamer of the tournament. Darshawn McClellan and Andre Walker were chosen as Vanderbilt's reps for the festivities by their teammates.
And did they ever represent...both swept through their Cincinnati opponents, and then took care of two Maryland players. Darshawn played against a player from Arizona. Andre went against a guy from Gonzaga. Darshawn won his game in a defensive struggle, and Andre lost a hard fought battle that came down to the final buzzer. Dre's last second three wouldn't go down, so Darshawn would take on Gonzaga for the Xbox title.
Darshawn started a little slow against the Zags, but battled back and got his groove going in the second half. He took the lead late in the game, and XBox-Jermaine Beal hit a late three to put the dagger in the Zags. Understandably, our guys went crazy and celebrated with Darshawn on the medal stand.
I took a few pictures of our festivities once we reached Maui...you can see those by clicking here.
So for now, good night from Maui...got a busy day tomorrow with meetings, press conferences, practice, and interviews with ESPN. We all need some rest.
Posted by A.Boggs at 2:17 AM