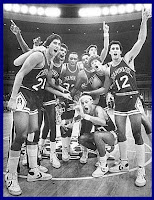 By Ryan Schulz - When Vanderbilt plays its second game of the Maui Invitational at 12:30 p.m. CT Tuesday (ESPN2), the Commodores will not just be facing the tournament host in Chaminade University, they will also be playing the team responsible arguably the biggest upset in the history of college basketball.

The date was Dec. 23, 1982 when a little-known NAIA school called Chaminade knocked off a top-ranked Virginia team, 77-72, that was led by its 7’4” All-American center Ralph Sampson.

Although tiny Chaminade, with its enrollment of 900 at the time, had just knocked off the giant, hardly anyone outside of the gym that evening knew about it until a day or two after since when the game went final it was past midnight on the West Coast and after 3 a.m. on the East Coast.

The game is now hailed by many as the biggest upset in the history of college basketball. Virginia was returning from playing games against Houston and Utah in Japan and had beaten Chaminade twice in the previous three seasons by no less than 15 points.

“This year we didn't even bother to prepare specially for them," Chaminade forward Richard Haenisch told Sports Illustrated. “The last two times we put a guy up on a chair in practice to play the role of [Ralph] Sampson. This time we were so down, we just said the heck with it.”

The upset also paved the way for the creation of the Maui Invitational — considered the crown jewel of all early-season tournaments. After Chaminade’s win, Virginia Head Coach Terry Holland made the suggestion to Chaminade Athletic Director Mike Vasconcellos that he might consider hosting a tournament in the future.

He listened, and the Maui Classic, as it was originally called, began in 1984 and is now the longest running early-season tournament in college basketball.
Posted by Ryan Schulz at 10:12 AM