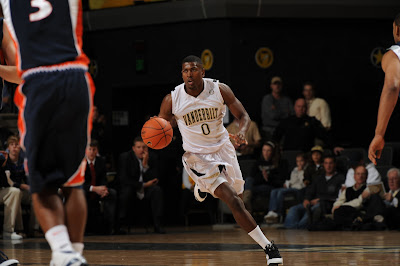 By A. Boggs - Times for most of the men's basketball non-conference games have been set for the upcoming season - see the link here for the complete schedule, with times and television.
The Commodores will appear on the ESPN family of networks three times in Maui and once at home against Missouri (8:30 p.m. CT, ESPNU). Other non-conference games slated for television include VU's game at Illinois (7:30 p.m. CT, Big Ten Network), and home games with Southern Miss (2 p.m. CT, FSN) and MTSU (8 p.m. CT, FSN).
All weeknight home games not being televised will begin at 7 p.m., and all Saturday home contests not set for TV will tip at 3 p.m.
Games that will begin at 7 p.m. include the Commodores' exhibition with Alabama Huntsville on November 10, a home contest with Lipscomb at 7 p.m., and home games in December against Mercer (Dec. 21) and Manhattan (Dec. 30). Games tipping off at 3 p.m. include a matchup at Memorial Gym with DePaul on December 5 and a game with Tennessee State on December 19.
The only two games without game times are at St. Mary's on November 20 and the game against Western Kentucky at the Sommet Center on December 11. As soon as that information becomes available, we'll pass that information along.
For now, Vanderbilt will appear on television in 23 out of 30 regular season games, with 13 games being aired on the ESPN family of networks. The Commodores will appear on the SEC Network four times, FSN three times, and CSS twice this season.
Posted by A.Boggs at 9:13 AM